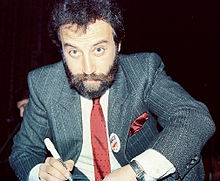 Yakov Smirnoff (born 24 January 1951) is a comedian who immigrated to America from the USSR. He was popular in the 1980s for comedy performances in which he used irony and word play to contrast life under the Communist regime in his native Soviet Union with life in the United States, delivered in heavily accented English.

We have been learning since we were children how to make money, buy things, build things. The whole education system is set up to teach us how to think, not to feel.
Use this quote

My father described this tall lady who stands in the middle of the New York harbor, holding high a torch to welcome people seeking freedom in America. I instantly fell in love.
Use this quote

If love is the treasure, laughter is the key.
Use this quote

We may have forgotten how to feel. Nobody is teaching us how to live happily ever after, as we've heard in fairy tales.
Use this quote

I like American women. They do things sexually Russian girls never dream of doing - like showering.
Use this quote