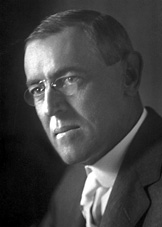 Thomas Woodrow Wilson (December 28, 1856 – February 3, 1924) was the 28th President of the United States, in office from 1913 to 1921. A leader of the Progressive Movement, he served as President of Princeton University from 1902 to 1910, and then as the Governor of New Jersey from 1911 to 1913. Running against Republican incumbent William Howard Taft, Socialist Party of America candidate Eugene V.

There is no higher religion than human service. To work for the common good is the greatest creed.
Use this quote

Interest does not tie nations together; it sometimes separates them. But sympathy and understanding does unite them.
Use this quote

The method of political science is the interpretation of life; its instrument is insight, a nice understanding of subtle, unformulated conditions.
Use this quote

Golf is a game in which one endeavors to control a ball with implements ill adapted for the purpose.
Use this quote