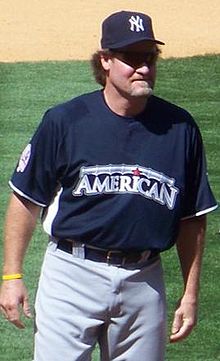 Wade Anthony Boggs (born June 15, 1958) is an American former professional baseball third baseman. He spent his 18-year baseball career primarily with the Boston Red Sox, but also played for the New York Yankees, with whom he won his only World Series, and Tampa Bay Devil Rays, with whom he recorded his 3,000th hit.

A positive attitude causes a chain reaction of positive thoughts, events and outcomes. It is a catalyst and it sparks extraordinary results.
Use this quote

Our lives are not determined by what happens to us but how we react to what happens, not by what life brings us but the attitude we bring to life.
Use this quote

Anyone can be a father, but it takes someone special to be a dad, and that's why I call you dad, because you are so special to me. You taught me the game and you taught me how to play it right.
Use this quote

The owner of the New York Yankees, Mr. George Steinbrenner who I had the greatest respect for, I want to thank him for giving me the opportunity to win that special ring in 1996.
Use this quote