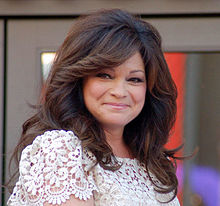 I'm a food addict, that's my downfall.
Use this quote

I've realized that I'm more important than food is. I love a big slice of pizza, but I love myself more. Being thin is about changing the way you think about yourself. It's about saying that you deserve to be healthy.
Use this quote

Once a food becomes off-limits, then it takes on this whole other personality. 'Forbidden' is more tempting. And it becomes something evil, but food is food. It's there to nourish your body.
Use this quote

Happiness is a choice. You can choose to be happy. There's going to be stress in life, but it's your choice whether you let it affect you or not.
Use this quote

I'm a full-time mom right now and a part-time actress.
Use this quote