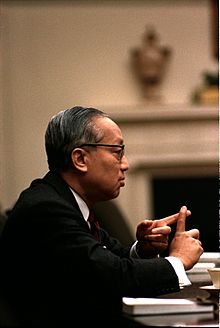 U Thant (January 22, 1909November 25, 1974) was a Burmese diplomat and served as the third Secretary-General of the United Nations, from 1961 to 1971. He was chosen for the post when his predecessor, Dag Hammarskjöld, died in September 1961. One of his most noteworthy accomplishments during his tenure as Secretary General was his valuable assistance in facilitating the negotiations between U.S.

Every human being, of whatever origin, of whatever station, deserves respect. We must each respect others even as we respect ourselves.
Use this quote