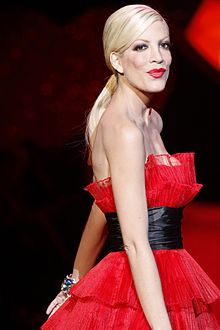 Victoria Davey "Tori" Spelling (born May 16, 1973) is an American actress and author. Her first major role was Donna Martin on Beverly Hills, 90210 in 1990. She appeared in a string of made-for-television films, such as A Friend to Die For (1994) and Mother, May I Sleep with Danger?

I just wanna thank all those amazing Internet bloggers out there that hate me day-to-day. I love you! You rock!
Use this quote

People are always saying that Hollywood messes up kids. I'm like, 'No, families mess up kids!' I grew up in Hollywood, and I'm perfectly fine. If my children want to go into the entertainment business, I won't stop them, as long as they're passionate about it.
Use this quote

I would eat healthy at times and pig out at times. But I never had to go on a strict diet plan.
Use this quote

I want to be a cool mom.
Use this quote

It was, you know, probably 80 degrees out in L.A., and my dad took me outside and there was snow. At the time, I thought, 'Every kid doesn't have snow in their backyard on Christmas?'
Use this quote

Whenever something happens that makes me laugh or if I remember something in the middle of the night that I want to share, I jot the experience down.
Use this quote

You know, you only get one family, and you have to make it work.
Use this quote

We are a very crafty family.
Use this quote