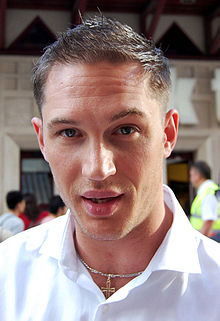 Edward Thomas "Tom" Hardy (born 15 September 1977) is an English actor. Some of his most notable film roles were in Star Trek: Nemesis, RocknRolla, Bronson, Warrior, Tinker Tailor Soldier Spy, This Means War, The Dark Knight Rises, and Inception, the critically acclaimed film for which he won the BAFTA Rising Star Award.

Fame and stuff like that is all very cool, but at the end of the day, we're all human beings. Although what I do is incredibly surreal and fun and amazing and I'm really grateful for it, I don't believe my own press release, do you know what I mean?
Use this quote

Being an only child, I didn't have any other family but my mom and dad really, since the rest of my family lived quite far away from London.
Use this quote

I wanted my dad to be proud of me, and I fell into acting because there wasn't anything else I could do, and in it I found a discipline that I wanted to keep coming back to, that I love and I learn about every day.
Use this quote

I'm from a nice, suburban, middle-class family, but my tattoos remind me where I've been.
Use this quote

I play Xbox. I have a little boy to look after. I have dogs. You know, I have things to do. I would love to be able to sit down and watch something like a movie. I watch my own movies because I have to.
Use this quote

If you're lucky like me, your relationship with your brother has resolved itself on the peaceful side of the fence and has stayed there. But if you're someone who's got a family that's all fractured and finding it hard to relate, that's a very sad place to be.
Use this quote