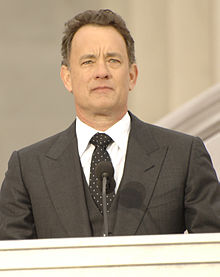 Thomas Jeffrey "Tom" Hanks (born July 9, 1956) is an American actor, producer, writer, and director. Hanks is best known for his roles in Big, A League of Their Own, Sleepless in Seattle, Forrest Gump, Apollo 13, Saving Private Ryan, You've Got Mail, The Green Mile, Cast Away, Road to Perdition, Catch Me If You Can, The Da Vinci Code and Angels & Demons, as well as animated films like the Toy Story film series, The Polar Express, and The Simpsons Movie.

The year I was born, 1956, was the peak year for babies being born, and there are more people essentially our age than anybody else. We could crush these new generations if we decided too.
Use this quote

But look, I was born in 1956, the peak year for births in US history. I think I'm very representative of many of the thought processes my generation have been through and, by and large, people of my age have had their imprint planted on the consciousness of western society for a long time.
Use this quote

As long as you as an individual... can convince yourself that in order to move forward as best you can you have to be optimistic, you can be described as 'one of the faithful,' one of those people who can say, 'Well, look, something's going to happen! Let's just keep trying. Let's not give up.
Use this quote

And I'm not apolitical - I'm very specific in my politics. But a lot of the time it's nobody's business unless you're over at my house having dinner.
Use this quote

The nature of motion capture is only going to work for certain films. It's not going to put any other type of movies out of business.
Use this quote

I do not want to admit to the world that I can be a bad person. It is just that I don't want anyone to have false expectations. Moviemaking is a harsh, volatile business, and unless you can be ruthless, too, there's a good chance that you are going to disappear off the scene pretty quickly.
Use this quote

My kid could get a bad X-ray and I could get a call from the doctor saying I have something growing in my bum and that would change my perspective on everything instantaneously, on what is and what is not important.
Use this quote

Tweeting is like sending out cool telegrams to your friends once a week.
Use this quote

No journalist has ever been in my house and no photographs have ever been taken of where I live. I don't parade my family out for display, which is the way it will stay.
Use this quote