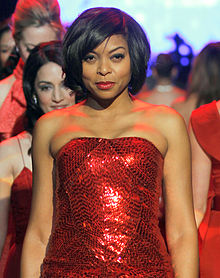 Taraji Penda Henson (born September 11, 1970) is an American actress and singer. She is best known for her roles as Yvette in Baby Boy (2001), Shug in Hustle and Flow (2005) and Queenie in The Curious Case of Benjamin Button (2008), for which she was nominated for an Academy Award for Best Supporting Actress in 2009. In 2009, she appeared in Tyler Perry's I Can Do Bad All By Myself as April, an alcoholic singer.

A woman is gentle, soft, delicate, and a man's position is to protect her, help her up stairs, make sure she's in the car safely first. Take good care of your woman, and the sky's the limit!
Use this quote

With TV, you get on a show and you're there for 11 years playing the same character. I would pull my hair out. Yes, the money is good. But I'm really not in this business to chase dollars.
Use this quote

It's up to you to be responsible for how you feel if you're not happy. Your happiness lies in your hands. You can't rely on a man to make you happy or complete you. That starts with you.
Use this quote

When I come home, it's about my kid, who needs to eat, needs to do homework, and needs to get to basketball. I don't have a lot of time to think about me.
Use this quote

I like to be home with my son, kickin' it and watching ESPN, a very normal life. I like to take him to school every day, watch his games.
Use this quote

Once you're a mom, always a mom. It's like riding a bike, you never forget.
Use this quote

I've been doing a lot of drama, but I feel like comedy is my strength.
Use this quote