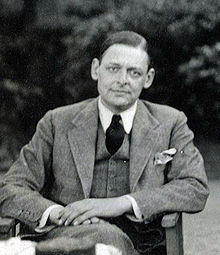 Thomas Stearns Eliot OM (September 26, 1888 – January 4, 1965) was an essayist, publisher, playwright, literary and social critic and "one of the twentieth century's major poets." Born in the United States, he moved to the United Kingdom in 1914 (at age 25) and was naturalised as a British subject in 1927 at age 39.

I don't believe one grows older. I think that what happens early on in life is that at a certain age one stands still and stagnates.
Use this quote

Art never improves, but... the material of art is never quite the same.
Use this quote

All significant truths are private truths. As they become public they cease to become truths; they become facts, or at best, part of the public character; or at worst, catchwords.
Use this quote

The communication of the dead is tongued with fire beyond the language of the living.
Use this quote

Business today consists in persuading crowds.
Use this quote

The business of the poet is not to find new emotions, but to use the ordinary ones and, in working them up into poetry, to express feelings which are not in actual emotions at all.
Use this quote

I had seen birth and death but had thought they were different.
Use this quote

Every experience is a paradox in that it means to be absolute, and yet is relative; in that it somehow always goes beyond itself and yet never escapes itself.
Use this quote

For love would be love of the wrong thing; there is yet faith, But the faith and the love and the hope are all in the waiting.
Use this quote

Knowledge is invariably a matter of degree: you cannot put your finger upon even the simplest datum and say this we know.
Use this quote