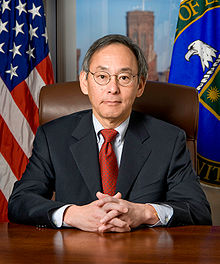 Steven Chu (born February 28, 1948) is an American physicist who became the 12th United States Secretary of Energy in 2009. Chu is known for his research at Bell Labs in cooling and trapping of atoms with laser light, which won him the Nobel Prize in Physics in 1997, along with his scientific colleagues Claude Cohen-Tannoudji and William Daniel Phillips.

By the fourth grade, I graduated to an erector set and spent many happy hours constructing devices of unknown purpose where the main design criterion was to maximize the number of moving parts and overall size.
Use this quote

My physics teacher, Thomas Miner was particularly gifted. To this day, I remember how he introduced the subject of physics. He told us we were going to learn how to deal with very simple questions such as how a body falls due to the acceleration of gravity.
Use this quote

I also developed an interest in sports, and played in informal games at a nearby school yard where the neighborhood children met to play touch football, baseball, basketball and occasionally, ice hockey.
Use this quote