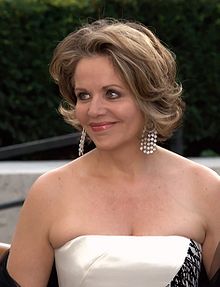 My worry is that opera will become an historic art form as opposed to a living, breathing thing.
Use this quote

I've always been inspired by artists who have shown musical and intellectual curiosity and the courage to take risks.
Use this quote

My parents discussed singing every night over the dinner table; I had a tremendous music education.
Use this quote

Very few opera singers in history have been able to cross into popular music.
Use this quote

I've spent hours and hours doing research into Appalachian folk music. My grandfather was a fiddler. There is something very immediate, very simple and emotional, about that music.
Use this quote

I have had a very difficult time with stage fright; it undermines your well-being and peace of mind, and it can also threaten your livelihood.
Use this quote

I think opera has gained a kind of glamorous appeal. It's a live performance that aligns all of the arts, and when it is represented in the media, in film in particular, it is presented as something that is really a special event, whether it's a great date or something that's just hugely romantic.
Use this quote

No voice teacher can be all things to all people. You have to gain information from whatever sources you can. You have to listen.
Use this quote

For years, I had no time for exploratory travel.
Use this quote

Having to travel so much plays havoc with your personal life.
Use this quote