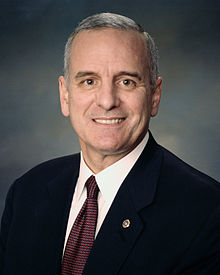 Mark Brandt Dayton (born January 26, 1947) is an American politician and the current and 40th Governor of Minnesota, serving since 2011. He was previously a United States Senator for Minnesota from 2001 to 2007, and the Minnesota State Auditor from 1991 to 1995. He is a member of the Minnesota Democratic–Farmer–Labor Party (DFL), which affiliates with the national Democratic Party.

Many soldiers returning from Iraq and Afghanistan suffer from serious, long-term, physical and mental health problems, due to their service. It is unconscionable to cut the already limited health care benefits available to these brave men and women.
Use this quote