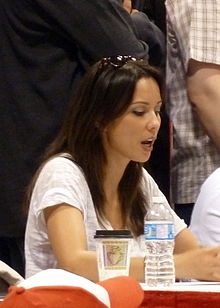 Lexa Doig (born Alexandra Lecciones Doig on June 8, 1973) is a Canadian TV and movie actress. She portrayed the title role in the Canadian-American science fiction-adventure television series Andromeda that premiered on October 2, 2000 and concluded on May 13, 2005, after 5 seasons that included 110 episodes.

I sit on my duff, smoke cigarettes and watch TV. I'm not exactly a poster girl for healthy living.
Use this quote

Thank God my parents had an abundance of patience.
Use this quote

I was actually a bit disappointed about the amount of sex in the show. I think Backus should get out a bit more, get a relationship, perhaps make her a lesbian.
Use this quote

I quite enjoy science fiction.
Use this quote