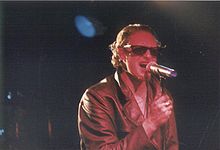 Layne Thomas Staley (August 22, 1967 – April 5, 2002) was an American musician who served as the lead singer and co-songwriter of the rock band Alice in Chains, which he and guitarist Jerry Cantrell formed in Seattle, Washington in 1987. Alice in Chains rose to international fame as part of the grunge movement of the early 1990s.

Kurt and I weren't the closest of friends, but I knew him well enough to be devastated by his death. For such a quiet person, he was so excited about having a child.
Use this quote

Andrew Wood's death changed things for a few weeks. I probably got even heavier into drugs after that.
Use this quote

I've always looked for the perfect life to step into. I've taken all the paths to get where I wanted.But no matter where I go, I still come home me.
Use this quote

When everyone goes home, you're stuck with yourself.
Use this quote

At home I'm just a guy who has interests that extend far beyond music.
Use this quote

Drugs are not the way to the light. They won't lead to a fairy-tale life, they lead to suffering.
Use this quote

Music is the doorway that has led me to drawing, photography, and writing.
Use this quote

It was all about music, about getting your friends to come and see you play. I don't see that same intimacy happening very much today.
Use this quote