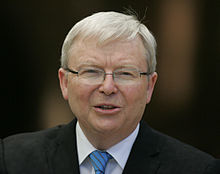 Something my mum taught me years and years and years ago, is life's just too short to carry around a great bucket-load of anger and resentment and bitterness and hatreds and all that sort of stuff.
Use this quote

Australia is a nation of compassion. Courage and compassion. And the third of these great values: resilience.
Use this quote

These are important reforms. Infrastructure, education, health, hospitals, closing the gap with indigenous Australians. Also the Apology to the first Australians. As Prime Minister of the country I am proud of each and every one of these achievements.
Use this quote

But Australia faces additional regional and global challenges also crucial to our nation's future - climate change, questions of energy and food security, the rise of China and the rise of India. And we need a strong system of global and regional relationships and institutions to underpin stability.
Use this quote

Building a new Health and Hospitals Network is fundamental to building a stronger and fairer Australia.
Use this quote

The Australian Government's decision to take on the dominant funding role for the entire public hospital system is designed to: end the blame game; eliminate waste; and to shoulder the funding burden of the rapidly rising health costs of the future.
Use this quote

If the states and territories do not sign up to fundamental reform, then my message is equally simple: we will take this reform plan to the people at the next election - along with a referendum by or at that same election to give the Australian Government all the power it needs to reform the health system.
Use this quote

There comes a time in the history of nations when their peoples must become fully reconciled to their past if they are to go forward with confidence to embrace their future.
Use this quote

We are so fortunate, as Australians, to have among us the oldest continuing cultures in human history. Cultures that link our nation with deepest antiquity. We have Aboriginal rock art in the Kimberley that is as ancient as the great Palaeolithic cave paintings at Altamira and Lascaux in Europe.
Use this quote

A continuing narrative throughout Australia's history that says it is better to build up than to tear down - this is the continuing mission of Labor.
Use this quote