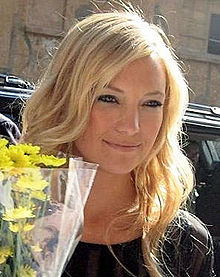 Kate Garry Hudson (born April 19, 1979) is an American actress. She came to prominence in 2001 after winning a Golden Globe and receiving several nominations, including a nomination for an Academy Award for Best Supporting Actress, for her role in Almost Famous.

I auditioned on my own. I tried to make a mark for myself without anybody's help, not even Mom's.
Use this quote

I'm not a big fan of romantic comedies, believe it or not.
Use this quote