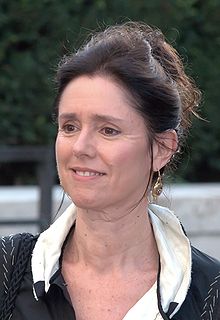 Julie Taymor (born December 15, 1952) is an American director of theatre, opera and film. Taymor's work has received many accolades from critics, and she has earned two Tony Awards out of four nominations, the Drama Desk Award for Outstanding Costume Design, an Emmy Award and an Academy Award nomination for Original Song.

Americans in particular are myopic. They're not traveling as much. When you were a college student, the next thing you would do on graduation was to take a year off and travel. That's what I did. I went to Indonesia.
Use this quote

Theater is far superior to film in poetry, in abstract poetry.
Use this quote

We have often been attracted to the story of the other, the outcast. And he and I just loved working together, so it just kept happening, and our relationship is completely bound up with our work. We enjoy each other's art.
Use this quote

I received from my experience in Japan an incredible sense of respect for the art of creating, not just the creative product. We're all about the product. To me, the process was also an incredibly important aspect of the total form.
Use this quote