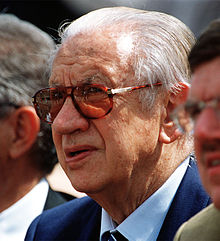 Don Juan Antonio Samaranch y Torelló, 1st Marquis of Samaranch, Grandee of Spain (17 July 1920 – 21 April 2010), known in Catalan as Joan Antoni Samaranch i Torelló (), was a Catalan Spanish sports administrator who served as the seventh President of the International Olympic Committee (IOC) from 1980 to 2001. Samaranch served the second longest term as the head of the IOC, the longest being that of Pierre de Coubertin (29 years).

Throughout its history, the international Olympic Committee has struggled to spread its ideal of fraternity, friendship, peace and universal understanding.
Use this quote

Our philosophy precedes from the belief that sport is an inalienable part of the educational process and a factor for promoting peace, friendship, cooperation and understanding among peoples.
Use this quote

We peruse one ideal, that of bringing people together in peace, irrespective of race, religion and political convictions, for the benefit of mankind.
Use this quote

Olympism is the marriage of sport and culture.
Use this quote

Olympism is a philosophy which, by blending sport with culture, seeks to create a way of life based on the joy found in effort, the educational value of good example and respect for universal ethical principles.
Use this quote