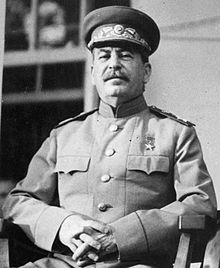 Joseph Stalin or Iosif Vissarionovich Stalin (born Ioseb Besarionis je J̌uḡašvili, , 18 December 1878 – 5 March 1953) was the de facto leader of the Soviet Union from the mid-1920s until his death in 1953. Among the Bolshevik revolutionaries who took part in the Russian Revolution of 1917, Stalin was appointed General Secretary of the party's Central Committee in 1922. He subsequently managed to consolidate power following the 1924 death of Vladimir Lenin through expanding the functions of his role, all the while eliminating any opposition.

In the Soviet army it takes more courage to retreat than advance.
Use this quote

One death is a tragedy; one million is a statistic.
Use this quote

Death solves all problems - no man, no problem.
Use this quote

Death is the solution to all problems. No man - no problem.
Use this quote

If any foreign minister begins to defend to the death a "peace conference," you can be sure his government has already placed its orders for new battleships and airplanes.
Use this quote

Education is a weapon whose effects depend on who holds it in his hands and at whom it is aimed.
Use this quote

If the opposition disarms, well and good. If it refuses to disarm, we shall disarm it ourselves.
Use this quote

History shows that there are no invincible armies.
Use this quote