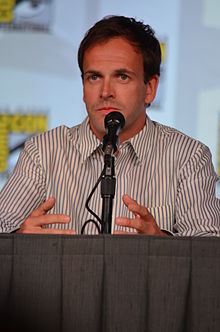 Jonathan "Jonny" Lee Miller (born 15 November 1972) is an English actor. He achieved early success with roles in the films Hackers (1995) and Trainspotting (1996), and worked steadily in film and theatre until 2008, when he starred as the series lead in two seasons of the American television series Eli Stone.

I really wouldn't want to live in America. I found New York claustrophobic and dirty. I missed England when I was there, simple things like smells and the British sense of humor.
Use this quote