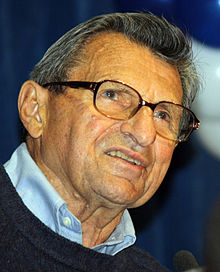 Joseph Vincent "Joe" Paterno (December 21, 1926 – January 22, 2012), sometimes referred to as "JoePa," was an American college football coach who was the head coach of the Penn State Nittany Lions from 1966 to 2011. His career ended with his dismissal from the team for his role in the Penn State child sex abuse scandal.

Success without honor is an unseasoned dish; it will satisfy your hunger, but it won't taste good.
Use this quote

Believe deep down in your heart that you're destined to do great things.
Use this quote