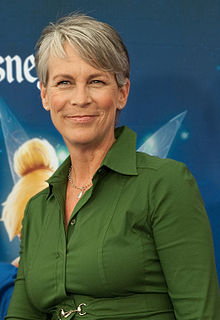 Jamie Lee Curtis, Baroness Haden-Guest (born November 22, 1958) is an American actress and author. Although she was initially known as a "scream queen" because of her starring roles in several horror films early in her career, such as Halloween, The Fog, Prom Night, and Terror Train, Curtis has since compiled a body of work that spans many genres, and has won BAFTA and Golden Globe awards.

I've been going through photos of my mother, looking back on her life and trying to put it into context. Very few people age gracefully enough to be photographed through their aging.
Use this quote

I was doing a children's book on self-esteem, and I really felt like I wanted to shed the shame I'd been feeling - and maybe make it easier for women my age who had probably felt bad about themselves.
Use this quote

I've always put my family first and that's just the way it is.
Use this quote

Hollywood is the backdrop of my family, and I know that the movie business is incredibly cruel as you get older.
Use this quote

I think happiness comes from self-acceptance. We all try different things, and we find some comfortable sense of who we are. We look at our parents and learn and grow and move on. We change.
Use this quote

I think my capacity to change has given me tremendous happiness, because who I am today I am completely content to be.
Use this quote

My marriage? Up to now everything's okay. But it's a real marriage - imperfect and very difficult. It's all about people evolving somewhat simultaneously through their lives. I think we've emotionally evolved.
Use this quote

My mother and stepfather were married 43 years, so I have watched a long marriage. I feel like I had a very good role model for that. And, you know, it's just a number.
Use this quote

Getting sober just exploded my life. Now I have a much clearer sense of myself and what I can and can't do. I am more successful than I have ever been. I feel very positive where I never did before, and I think that's all a direct result of getting sober.
Use this quote

Well, I could do it for a day, but I wouldn't want to be a teenager again. I really wouldn't.
Use this quote