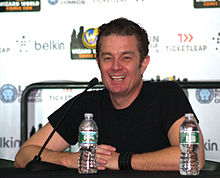 James Wesley Marsters (born August 20, 1962) is an American actor and musician. Marsters first came to the attention of the general public playing the popular character Spike, a platinum-blond yobbish English vampire in the television series Buffy the Vampire Slayer and its spin-off series, Angel, from 1997 to 2004. Since then, he has gone on to play other science fiction roles, such as the alien supervillain Brainiac on the Superman-inspired series Smallville, the omnisexual time traveller Captain John Hart in British science-fiction show Torchwood, and terrorist Barnabas Greeley in Syfy's Caprica.

Yes, we were looking for a Faith spin-off, but then Faith backed down. Eliza got a really wonderful offer over on Fox in a show, and, for reasons I didn't talk to her about, she decided to go there, and everyone respects that.
Use this quote

In Europe they call geeks 'smart people,' and frankly I think we live in a culture that doesn't value intelligence enough; so I am very proud in saying that I am a geek.
Use this quote