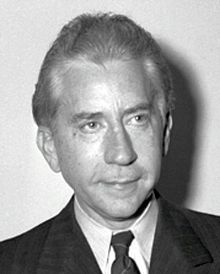 Jean Paul Getty (December 15, 1892 – June 6, 1976) was an Anglo-American industrialist. He founded the Getty Oil Company, and in 1957 Fortune magazine named him the richest living American, whilst the 1966 Guinness Book of Records named him as the world's richest private citizen, worth an estimated $1.2 billion (approximately $ billion in ).

The meek shall inherit the Earth, but not its mineral rights.
Use this quote

I buy when other people are selling.
Use this quote

No one can possibly achieve any real and lasting success or 'get rich' in business by being a conformist.
Use this quote

To succeed in business, to reach the top, an individual must know all it is possible to know about that business.
Use this quote

Without the element of uncertainty, the bringing off of even, the greatest business triumph would be dull, routine, and eminently unsatisfying.
Use this quote

In times of rapid change, experience could be your worst enemy.
Use this quote

The employer generally gets the employees he deserves.
Use this quote

If you can count your money, you don't have a billion dollars.
Use this quote

Money is like manure. You have to spread it around or it smells.
Use this quote