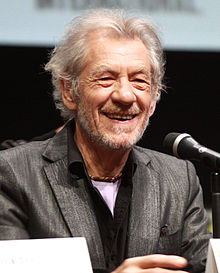 Sir Ian Murray McKellen, CH, Kt, CBE (born 25 May 1939) is an English actor. Widely considered one of the greatest actors of his generation and one of the greatest British actors of all time, he is the recipient of six Laurence Olivier Awards, a Tony Award, a Golden Globe Award, two Academy Award nominations, four BAFTA nominations and five Emmy Award nominations, McKellen's work spans genres ranging from Shakespearean and modern theatre to popular fantasy and science fiction.

When we'd suggested doing it, the Theatre Royal management had said, 'Nobody wants to see Waiting for Godot.' As it happened, every single ticket was booked for every single performance, and this confirmation that our judgment was right was sweet. Audiences came to us from all over the world. It was amazing.
Use this quote

Acting is a very personal process. It has to do with expressing your own personality, and discovering the character you're playing through your own experience - so we're all different.
Use this quote

It's only fair that stable gay relationships of long standing should have the same rights and responsibilities as married couples. I know the image of gay marriage is to some people horrific and ludicrous.
Use this quote