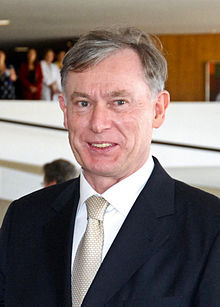 Horst Köhler (born 22 February 1943) is a German politician of the Christian Democratic Union. He was President of Germany from 2004 to 2010. As the candidate of the two Christian Democratic sister parties, the CDU and the CSU, and the liberal FDP, Köhler was elected to his first five-year term by the Federal Assembly on 23 May 2004 and was subsequently inaugurated on 1 July 2004. He was reelected to a second term on 23 May 2009. Just a year later, on 31 May 2010, he resigned from his office in a controversy over his comment on the role of the German Bundeswehr in light of a visit to the troops in Afghanistan.

Responsibility and respect of others and their religious beliefs are also part of freedom.
Use this quote

Germany must be a country which generates political ideas and leadership, which is capable of compromise, which is sovereign and yet knows that it needs its partners on both sides of the Atlantic.
Use this quote