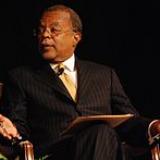 I first learned that there were black people living in some place called other than the United States in the western hemisphere when I was a very little boy, and my father told me that when he was a boy about my age, he wanted to be an Episcopal priest, because he so admired his priest, a black man from someplace called Haiti.