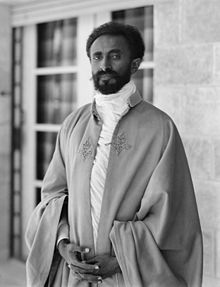 Haile Selassie I ( qädamawi haylä səllasé ) , born Tafari Makonnen Woldemikael, was Ethiopia's regent from 1916 to 1930 and Emperor of Ethiopia from 1930 to 1974. He was the heir to a dynasty that traced its origins by tradition from King Solomon and Queen Makeda, Empress of Axum, known in the Abrahamic tradition as the Queen of Sheba.

Outside the kingdom of the Lord there is no nation which is greater than any other. God and history will remember your judgment.
Use this quote