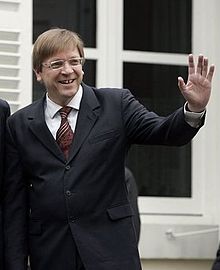 Guy Verhofstadt (born Guy Maurice Marie Louise VerhofstadtApril 11, 1953) is a Belgian politician, who served as the 47th Prime Minister of Belgium from 1999 to 2008. Since 2009 he has served as a Member of the European Parliament where he is the leader of the Group of the Alliance of Liberals and Democrats for Europe (ALDE) and founded the inter-parliamentarian federalist Spinelli Group.

Let us face it: in the world today, money and economic strength remain more powerful arguments than the number of people you represent.
Use this quote

Where do you find the strength to brave a barrage of enemy fire and to bring your wounded friends to safety at great risk to your own life? Conviction.
Use this quote