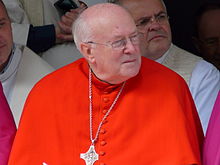 Godfried Maria Jules Danneels (born 4 June 1933) is a Belgian cardinal of the Roman Catholic Church. He served as the Metropolitan Archbishop of Mechelen-Brussels and the chairman of the episcopal conference of his native country from 1979 to 2010. He was elevated to the cardinalate in 1983. His resignation at the age of 75 was accepted by Pope Benedict XVI on 18 January 2010.

There is a very well-defined procedure that allows the Vatican to raise issues with a particular theologian about something that does not appear in conformity with the Catholic faith. It is not always easy to make this determination.
Use this quote

Artificial Intelligence leaves no doubt that it wants its audiences to enter a realm of pure fantasy when it identifies one of the last remaining islands of civilization as New Jersey.
Use this quote