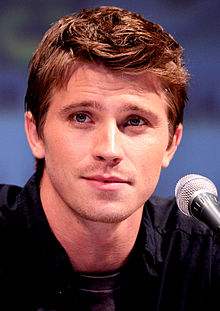 Garrett John Hedlund (born September 3, 1984) is an American actor known for his roles in the films Friday Night Lights, Four Brothers, Eragon, Country Strong, for his role as Patroclus in the movie Troy, as Sam Flynn in Tron: Legacy and as Dean Moriarty (a fictionalized Neal Cassady) in the film On the Road.

I grew up on a farm in a small town where you do or say one thing and everybody knows about it. You see it happen, there's always the town gossip - 'Oh did you hear about so and so, or did you hear what went on in this household?' So I learned at a very young age just to keep my mouth shut.
Use this quote

Life's too short when you find yourself sitting in a car for four hours every day trying to get from East L.A. to West L.A. to Hollywood and then back to East L.A.
Use this quote

I was a 'Duck Hunt' and 'Mario' guy, and stuff like that. I was never technologically driven. I never had all the cool, new toys. I was the youngest child, I wasn't the only child, so I wasn't spoiled as a kid. And, we were on the farm, so we didn't have a lot. Also, with computers, I'm not very good with them. I just check my email.
Use this quote

It's funny, though, speaking of fathers and sons, because me and John Goodman played father and son, like, five or six years ago in the film 'Death Sentence,' and I got back with him again in 'Inside Llewyn Davis.'
Use this quote

Especially for me, growing up in such a small town in the middle of nowhere, the desire to be away was incredible. I wanted to see new lands, meet new people from the city, and meet people that were in much less fortunate situations than I was, so that I could be more appreciative of my present. At least I had food on the table.
Use this quote

It's funny that I got to do 'On the Road' because the thing that had the biggest impact on me growing up was reading books. I was very inspired by the book and this spirit of Dean Moriarty and how envious we all are of somebody who can be that carefree.
Use this quote

It's funny - I read that women look to chiseled-faced guys for one-night stands, and to round-faced guys for marriage. When I'm rounder in the face, I like to say, 'This is my long-term look.' Or 'This is my wife-and-kids look right here.'
Use this quote

For me, and this may not be everybody, but because I do love country music so much, there's such a feeling of home in Nashville, especially because it's such a small town. You bring up one song, everybody knows who wrote it, everybody knows their mother and what their cell number is, and all of the stories.
Use this quote

Anybody that wants to walk out that door and leave home for a few months and rely on themselves instead of fate might have some interesting stories to tell.
Use this quote

I used to be sick of the backroads of Minnesota. I had to drive 30 miles to get home every day, take the schoolbus for two hours. But to drive through America and see the backroads, from Nashville to Memphis, Lovick to New Mexico, was incredible. It was probably the greatest trip of my life.
Use this quote