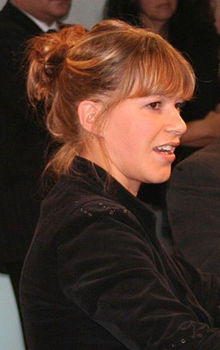 Franka Potente (born 22 July 1974) is a German film actress and singer. She first appeared in the comedy After Five in the Forest Primeval (1995), for which she won a Bavarian Film Award for Best Young Actress and her breakthrough came in 1998, when she had the leading role in the acclaimed action thriller Lola rennt (released in English as Run Lola Run) (1998).

I think working with Johnny Depp was very intimidating. It was my fault though. I mean he's a total cool nice, nice guy, but I was just so, I don't know, overpowered by his presence. Like he's a very mystic person. He's older so I never really warmed up around him. I was so stiff.
Use this quote

I've published one book before, and now I'm writing a book of essays and stories about life in Tokyo. And I have one book coming out in May in Germany, about fitness.
Use this quote