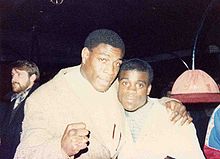 Franklin Roy "Frank" Bruno MBE (born 16 November 1961) is a British former boxer whose career highlight was winning the WBC heavyweight championship in 1995 (which he lost six months later in his first defence).

I want to stay healthy, keep fit, eat well, keep a low profile and be a good dad.
Use this quote

Mental illness can happen to anybody. You can be a dustman, a politician, a Tesco worker... anyone. It could be your dad, your brother or your aunt.
Use this quote

Sometimes your dreams come true.
Use this quote

I try and maintain a little bit of fitness, man.
Use this quote

People take the mickey out of mental health, but it is very delicate.
Use this quote

I still believe in marriage.
Use this quote