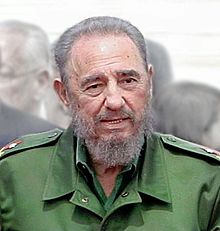 Fidel Alejandro Castro Ruz (born August 13, 1926) is a Cuban communist revolutionary and politician who was Prime Minister of Cuba from 1959 to 1976, and President from 1976 to 2008. He also served as the Commander in Chief of the country’s armed forces from 1959 to 2008, and as the First Secretary of the Communist Party of Cuba from 1961 until 2011. Politically a Marxist-Leninist, under his administration the Republic of Cuba became a one-party socialist state industry and businesses were nationalized, and socialist reforms implemented in all areas of society.

I think that a man should not live beyond the age when he begins to deteriorate, when the flame that lighted the brightest moment of his life has weakened.
Use this quote

A revolution is a struggle to the death between the future and the past.
Use this quote

I began revolution with 82 men. If I had to do it again, I do it with 10 or 15 and absolute faith. It does not matter how small you are if you have faith and plan of action.
Use this quote

Capitalism is using its money; we socialists throw it away.
Use this quote

Men do not shape destiny, Destiny produces the man for the hour.
Use this quote

The revenues of Cuban state-run companies are used exclusively for the benefit of the people, to whom they belong.
Use this quote

They talk about the failure of socialism but where is the success of capitalism in Africa, Asia and Latin America?
Use this quote

No thieves, no traitors, no interventionists! This time the revolution is for real!
Use this quote

I find capitalism repugnant. It is filthy, it is gross, it is alienating... because it causes war, hypocrisy and competition.
Use this quote