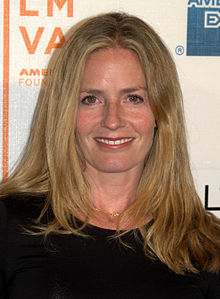 Elisabeth Judson Shue (born October 6, 1963) is an American actress, known for her roles in the films The Karate Kid, Adventures in Babysitting, Cocktail, Back to the Future Parts II, III, The Saint and Leaving Las Vegas, for which she won five acting awards and was nominated for an Academy Award, a Golden Globe and a BAFTA.

I see myself at a certain age as not being able to play the kind of parts that would keep me stimulated, and I can't imagine my life ending professionally the moment that I've got to go to the plastic surgeon and have my face rearranged.
Use this quote

I understand now that the vulnerability I've always felt is the greatest strength a person can have. You can't experience life without feeling life. What I've learned is that being vulnerable to somebody you love is not a weakness, it's a strength.
Use this quote

Every experience makes you grow.
Use this quote

Every film is a crapshoot. It's a mystery when a movie comes together. I've never been able to figure it out. I don't know how I make my choices. The only thing you can do is know there's something about a character that you really want to experience.
Use this quote

I really love 'Soapdish.' I wish 'Soapdish' had more of a moment because I felt that that is a really strong, funny movie. Kevin Kline is hilarious in that movie.
Use this quote

My mom had started to go to work when I was nine or ten, so I was aware of women trying to find their own identities by working. But I was still influenced by men to such an extreme. I wanted to play their games and wanted to compete in their world and be like them.
Use this quote

People love to talk about how the '70s are the only time they made movies about characters, and adult movies, and complicated people. But in the '80s, they got away with some of those too.
Use this quote

After three major movies, I was like, 'Oh, I guess you're supposed to get a publicist?' Girls that are in the business now that are successful are more savvy.
Use this quote

Robert Kennedy was such an inspiring figure. His interest in politics seemed to come not from a desire for power, but from a need to help our society live up to its ideals.
Use this quote

Everyone at 'CSI' has been so great to work with, and so great in terms of scheduling. There's a real feeling of family on that set... I've grown to have so much respect for the cast and crew - they're been together so many years and still care about the show and each other.
Use this quote