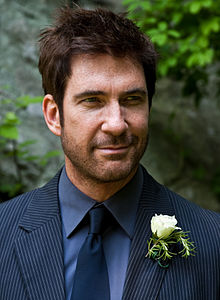 Mark Anthony McDermott (born October 26, 1961), better known by his professional name of Dylan McDermott, is an American actor, known for his role as lawyer and law firm head Bobby Donnell on the television legal drama The Practice, which earned him a Golden Globe and an Emmy nomination, and his role in the series American Horror Story as Dr.

It's like, no matter what I do, I always feel like I'm five years old, and I end up in the back of my father's car looking out the window, and nothing has changed in 25 years.
Use this quote

New York had a big influence on me growing up, and I was really part of the club scene - the Mudd Club and Studio 54. When you're living in New York, you are just bombarded with style, trying to figure out how to be cool and how to feel relaxed at the same time.
Use this quote

My dad was kind of a pool shark and had a Frank Sinatra, Dean Martin thing going on. I've always been fascinated by the fifties because of him. There was a hip, cool, anything-goes atmosphere back then, but looking good was still a priority.
Use this quote

Style is innate to who I am. My father gave me a picture the other day. I must have been about seven, and I had on wing-tip shoes and some cool pants. I thought, 'Wow!'
Use this quote

Honestly, I'm cool with everyone, and people pick up on that. I'd say, 'I'm not gay, but it's all good.' It's kind of like going to Paris when you don't know the language; some Americans get into trouble over there, but I'm just like, 'Sorry, I don't speak French.'
Use this quote

Yeah, romantic comedies are the hardest movies to make. Maybe one works a year.
Use this quote