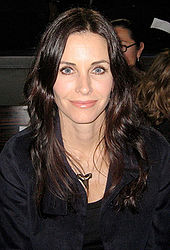 Courteney Bass Cox (born June 15, 1964) is an American actress, producer, and director. She is best known for her roles as Monica Geller on the NBC sitcom Friends, Gale Weathers in the horror series Scream, and as Jules Cobb in the ABC/TBS sitcom Cougar Town, for which she earned her first Golden Globe nomination.

A lot of my humor does come from anger. It's like, you're not gonna pull one over on me - which is pretty much my motto anyways.
Use this quote

I'm at peace with myself and where I am. In the past, I was always looking to see how everybody else was doing. I wasn't competitive, I was comparative. I just wanted to be where everybody else was. Now I've gotten to an age when I am not comparing anymore.
Use this quote

I think it's hard, the fact that there's a certain age that we can't have kids anymore.
Use this quote

Some things never change and the intriguing things you fall in love with will become the things you don't like.
Use this quote

I want to change a lot.
Use this quote

If I like myself at this weight, then this is what I'm going to be. I don't have an eating disorder.
Use this quote

At one point my dad called me and said, 'You have always been a great salesman. I think it's time you come home and sell swimming pools.'
Use this quote

You know, my mother's beautiful, my dad was a really handsome man, and there was a lot of talk about looks when I was growing up.
Use this quote

I've got some great guy friends. They can start out as crushes. But when you realize something isn't going to happen, you make a choice whether or not the friendship is worth it. And it usually is. Then you can laugh about the fact that you used to have a crush on him or he had one on you.
Use this quote

It's funny, because I never think of myself as Little Miss All-Together.
Use this quote