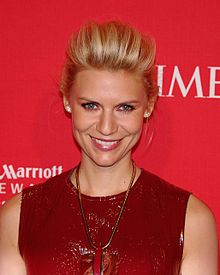 Claire Catherine Danes (born April 12, 1979) is an American actress of television, stage, and film. She has appeared in roles such as Angela Chase in My So-Called Life, as Juliet in Baz Luhrmann's Romeo + Juliet, as Cosette in Les Misérables, as Yvaine in Stardust, and as Temple Grandin in the HBO TV film Temple Grandin.

I became very successful at a young age... I had lots of opportunities and lots of power and had no idea how to focus it.
Use this quote

I took three years off. I differentiated myself from the industry. Found my identity - sort of... I haven't graduated yet. I'm not legitimately educated yet, but maybe one day.
Use this quote

I have a huge, active imagination, and I think I'm really scared of being alone; because if I'm left to my own devices, I'll just turn into a madwoman.
Use this quote

I have this home in New York, I have a long-term relationship with my boyfriend, who's from Australia, and I had this business that I had maintain. Even though I wasn't actively shooting, there's a lot of peripheral work.
Use this quote

Growing up, I wanted desperately to please, to be a good girl.
Use this quote