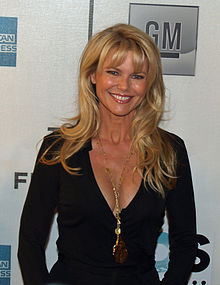 Christie Brinkley (born Christie Lee HudsonFebruary 2, 1954) is an American model and actress. Brinkley gained worldwide fame beginning in the late 1970s with three consecutive Sports Illustrated Swimsuit Issue covers through 1981. She spent twenty five years as the face of CoverGirl (the longest running cosmetics contract of any model in history), has appeared on over 500 magazine covers, and has signed contracts with major brands—both fashion and non-fashion.

After the first miscarriage, I tried to take the attitude that it was my body's way of telling me that this pregnancy wasn't meant to be.
Use this quote

I don't count that relationship with Ricky. It's just like a blip at this point. I had to fall in love with the devil himself to get this sweet angel, Jack.
Use this quote