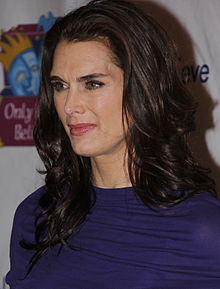 Brooke Shields (born May 31, 1965) is an American actress, model and former child star. Shields, initially a child model, gained critical acclaim for her leading role in Louis Malle's wildly controversial film Pretty Baby (1978), in which she played a child prostitute in New Orleans at the turn of the 20th century.

My father's death, my move, and my frightening and difficult delivery created a tremendous amount of stress, pain, and sadness for me. I was practically devastated beyond recovery.
Use this quote

Louis Malle was the best filmmaker I've ever worked with. He was such an artist. He was dealing with the theme of innocence and experience.
Use this quote

Have faith in your own thoughts.
Use this quote

Smoking kills. If you're killed, you've lost a very important part of your life.
Use this quote

The difficulty of IVF or of any fertility issues is the hope and the shattered hope, the dream that it might happen this time and then it doesn't happen.
Use this quote

What does good in bed mean to me? When I'm sick and I stay home from school propped up with lots of pillows watching TV and my mom brings me soup - that's good in bed.
Use this quote

I hope this will help new moms not feel alone or desperate, and that there is no shame in their feelings. PPD is out of their control, but the treatment and healing process is not.
Use this quote

It was my mom and I against the world. We lived in New York in this bohemian lifestyle where an extended group of artists and photographers were like my aunts and uncles.
Use this quote

I think I'm going to have to live vicariously through my daughter's rebellion because I certainly never did go through adolescence.
Use this quote

I suffered from post-natal depression after Rowan was born. I had a healthy, beautiful baby girl and I couldn't look at her. I couldn't hold her, smile at her. All I wanted was to disappear and die.
Use this quote