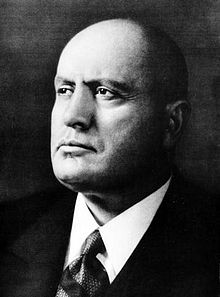 Benito Amilcare Andrea Mussolini (29 July 1883 – 28 April 1945) was an Italian politician, journalist and leader of the National Fascist Party, ruling the country from 1922 to his ousting in 1943. In 1926 Mussolini seized total power as dictator and ruled Italy as Il Duce ("the leader") from 1930 to 1943. Mussolini was one of the key figures in the creation of fascism.

War alone brings up to their highest tension all human energies and imposes the stamp of nobility upon the peoples who have the courage to make it.
Use this quote

Inactivity is death.
Use this quote

It's good to trust others but, not to do so is much better.
Use this quote

Fascism should rightly be called Corporatism, as it is the merger of corporate and government power.
Use this quote

It is humiliating to remain with our hands folded while others write history. It matters little who wins. To make a people great it is necessary to send them to battle even if you have to kick them in the pants. That is what I shall do.
Use this quote

Fascism is a religion. The twentieth century will be known in history as the century of Fascism.
Use this quote

War is to man what maternity is to a woman. From a philosophical and doctrinal viewpoint, I do not believe in perpetual peace.
Use this quote

Fascism, the more it considers and observes the future and the development of humanity, quite apart from political considerations of the moment, believes neither in the possibility nor the utility of perpetual peace.
Use this quote

Fascism should more appropriately be called Corporatism because it is a merger of state and corporate power.
Use this quote