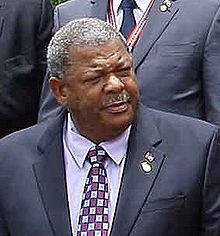 Winston Baldwin Spencer (born October 8, 1948) is the Prime Minister of Antigua and Barbuda. He has been Prime Minister since March 24, 2004, when his party, the United Progressive Party (UPP), which he had led as the opposition party for several years, won a parliamentary election.

It is time for the world, the hemisphere and the region to make sure that relevant institutions of civil society and relevant laws are embedded in the mechanisms of governance.
Use this quote