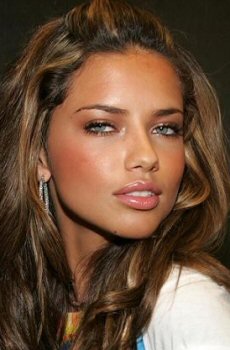 Adriana Lima (born June 12, 1981) is a Brazilian model and actress who is best known as a Victoria's Secret Angel since 2000, and as a spokesmodel for Maybelline cosmetics from 2003 to 2009. At the age of 15, Lima finished first in Ford's "Supermodel of Brazil" competition, and took second place the following year in the Ford "Supermodel of the World" competition before signing with Elite Model Management in New York City.

Be sure what you want and be sure about yourself. Fashion is not just beauty, it's about good attitude. You have to believe in yourself and be strong.
Use this quote

You don't have to have an attitude if you're famous.
Use this quote

My favorite designer is Christian Lacroix, not just because his clothes are amazing and I love them, but because he's so nice. When I did his fashion show, he was the first one to arrive there and he helped everyone.
Use this quote

I'm a teenager, but I'm independent - I have my own apartment, I have my own life. And I think I have learned more than any of those teenagers have in school. I learned to be responsible, leaving my family and coming here alone.
Use this quote

I like jealous men. I love jealousy. I do.
Use this quote

I missed out on everything. Sometimes on the street I see teenagers hanging out and going to the movies, going to concerts, and I get so jealous.
Use this quote

I was so embarrassed about mispronouncing words. I just knew how to smile.
Use this quote